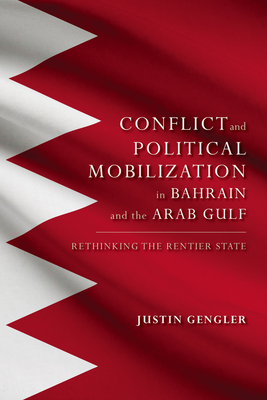 By Justin Gengler
$101.25
NOT on our shelves now. Usually ships from warehouse in several days.

The oil-producing states of the Arab Gulf are said to sink or swim on their capacity for political appeasement through economic redistribution. Yet, during the popular uprisings of the Arab Spring, in Bahrain and all across the Arab Gulf, ordinary citizens showed an unexpected enthusiasm for political protest directed against governments widely assumed to have co-opted their support with oil revenues. Justin Gengler draws on the first-ever mass political survey in Bahrain to demonstrate that neither is the state willing to offer all citizens the same bargain, nor are all citizens willing to accept it. Instead, shared social and religious identities offer a viable basis for mass political coordination. Challenging the prevailing rentier interpretation of political life in the Gulf states, Gengler offers new empirical evidence and a new conceptual framework for understanding the attitudes of ordinary citizens.