New York's Yiddish Theater: From the Bowery to Broadway (Hardcover) 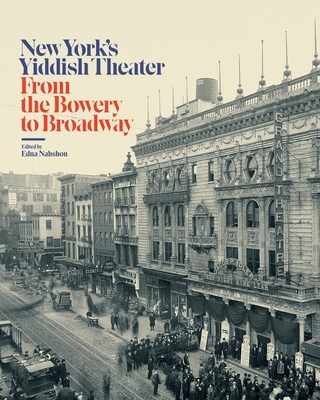 In the early decades of the twentieth century, a vibrant theatrical culture took shape on New York City's Lower East Side. Original dramas, comedies, musicals, and vaudeville, along with sophisticated productions of Shakespeare, Ibsen, and Chekhov, were innovatively staged for crowds that rivaled the audiences on Broadway. Though these productions were in Yiddish and catered to Eastern European, Jewish audiences (the largest immigrant group in the city at the time), their artistic innovations, energetic style, and engagement with politics and the world around them came to influence all facets of the American stage. Vividly illustrated and with essays from leading historians and critics, this book recounts the heyday of "Yiddish Broadway" and its vital contribution to American Jewish life and crossover to the broader American culture. These performances grappled with Jewish nationalism, labor relations, women's rights, religious observance, acculturation, and assimilation. They reflected a range of genres, from tear-jerkers to experimental theater. The artists who came of age in this world include Stella Adler, Eddie Cantor, Jerry Lewis, Sophie Tucker, Mel Brooks, and Joan Rivers. The story of New York's Yiddish theater is a tale of creativity and legacy and of immigrants who, in the process of becoming Americans, had an enormous impact on the country's cultural and artistic development.

Edna Nahshon is professor of theater and drama at the Jewish Theological Seminary and senior associate at Oxford University's Center for Hebrew and Jewish Studies. She is the author of Jews and Theater in an Intercultural Context and Jewish Theatre: A Global View, and the editor of From the Ghetto to the Melting Pot: Israel Zangwill's Jewish Plays.