The Elements: A Visual History of Their Discovery (Hardcover) 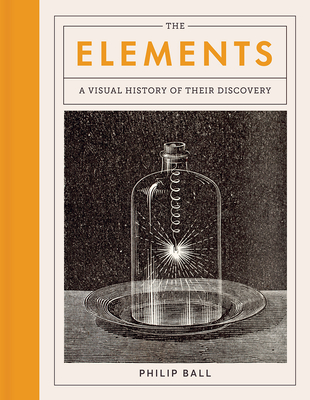 From water, air, and fire to tennessine and oganesson, celebrated science writer Philip Ball leads us through the full sweep of the field of chemistry in this exquisitely illustrated history of the elements.

The Elements is a stunning visual journey through the discovery of the chemical building blocks of our universe. By piecing together the history of the periodic table, Ball explores not only how we have come to understand what everything is made of, but also how chemistry developed into a modern science. Ball groups the elements into chronological eras of discovery, covering seven millennia from the first known to the last named. As he moves from prehistory and classical antiquity to the age of atomic bombs and particle accelerators, Ball highlights images and stories from around the world and sheds needed light on those who struggled for their ideas to gain inclusion. By also featuring some elements that aren’t true elements but were long thought to be—from the foundational prote hyle and heavenly aetherof the ancient Greeks to more recent false elements like phlogiston and caloric—The Elements boldly tells the full history of the central science of chemistry.

Philip Ball is a freelance writer and broadcaster, and was an editor at Nature for more than twenty years. He writes regularly in the scientific and popular media and has written many books on the interactions of the sciences, the arts, and wider culture, including H2O: A Biography of Water and The Music Instinct. His book Critical Mass won the 2005 Aventis Prize for Science Books. Ball is also a presenter of Science Stories, the BBC Radio 4 series on the history of science. He trained as a chemist at the University of Oxford and as a physicist at the University of Bristol. He lives in London.

"One of the grandest rewards of the scientific perspective is that it allows us to view the familiar world in fresh and unfamiliar ways. . . . The Elements breaks physical reality down into its smallest cohesive parts, as have many other books about the periodic table. What is unusual here is the way this book builds the story back up. Ball, who originally trained as a chemist, plunges deep into the history of the elements, dividing it into eight eras, each defined by distinctive notions of what it means for a substance to be fundamental. . . . Today, the periodic table is still expanding, as researchers synthesize heavier and heavier atomic nuclei. But even the well-known elements remain in flux, changing with each shift in our scientific thinking. The book’s illustrations, meticulously researched and artfully presented, drive home the point. A gold-platinum mask, forged by an unknown pre-Columbian artist some 2,500 years ago, demonstrates an advanced understanding of alloys, but it stares out of the page with an almost alien visage."
— American Scientist

"In this fascinating visual history of the elements, Ball spans over 3,000 years of scientific discovery from the classical era of Plato to the present day. Each element and story behind their discovery has been told in detail with the use of engaging images including scientific firsts in photography, as well as interesting artifacts and some beautiful historical drawings. More than this, the book is virtually a history of scientific discovery itself."
— BBC Science Focus

"Using some two hundred images, Ball describes how we discovered the building blocks of the universe—including some fake elements like phlogiston."
— Milwaukee Journal Sentinel

"Not only does the book deliver on its promise of making the elements seem like fully rounded characters, but it does so while retaining a critical eye for Eurocentric, anachronistic, and androcentric ways of laying out such tales of discovery. . . . The actual pictures in the book are as well designed as Ball’s overall ‘big picture.’ The tales of discovery are gorgeously punctuated with images as varied as wallpaper designed by William Morris and kohl from 1250–1200 BCE, not to mention various apparatuses, furnaces, and dusty chemistry kits. Crucially, the book’s visuality is not limited to its design but extends to the writing. There is, for instance, the account of the discovery of indium, involving a color-blind chemist facing up to the challenge of spectroscopy: its melting point is that at which melted sugar turns into toffee. Imaginaries like this render Ball’s account of the elements a joy to read. . . . It is difficult to put down Ball’s visual history of the discovery of the elements without feeling like you got to know the elements better and had fun in the process. The book should be useful and interesting not only to those just starting to learn about the chemical elements and history of chemistry but also to the specialist—both in terms of its content and in the way it sets an example for popularizing history of science within the academy and beyond."
— Isis

“Ball has once again produced a terrific book, one that presents a tremendous amount of the history of chemistry in a manner that is engagingly written, beautifully illustrated, and conscientious about avoiding the usual traps of popular science: triumphalism, a Eurocentric and male bias, and a reliance on just-so stories that are inadequately supported by the evidence. I cannot think of another popular history of chemistry I have so enjoyed reading.”
— Michael D. Gordin, author of "On the Fringe: Where Science Meets Pseudoscience"

"This attractive, copiously illustrated book lays out the history of the discovery of the elements beginning with the insights of the classical Greeks and working forward to the most recent discoveries of superheavy elements. . . . Every page is filled with relevant quotes from literature and science as well as large, detailed illustrations. . . . The volume concludes with meticulous documentation of sources for quoted material and the usual list of further reading, illustration credits, and the like. . . . A very pleasant book to read and handle. . . . Recommended."
— Choice