Heidegger: The Question of Being and History (The Seminars of Jacques Derrida) (Paperback) 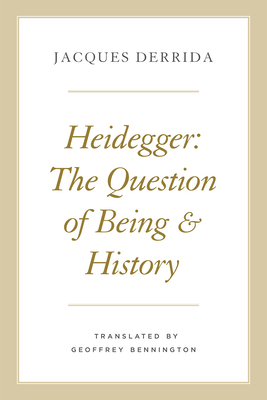 Few philosophers held greater fascination for Jacques Derrida than Martin Heidegger, and in this book we get an extended look at Derrida’s first real encounters with him. Delivered over nine sessions in 1964 and 1965 at the École Normale Supérieure, these lectures offer a glimpse of the young Derrida first coming to terms with the German philosopher and his magnum opus, Being and Time. They provide not only crucial insight into the gestation of some of Derrida’s primary conceptual concerns—indeed, it is here that he first uses, with some hesitation, the word “deconstruction”—but an analysis of Being and Time that is of extraordinary value to readers of Heidegger or anyone interested in modern philosophy.

Derrida performs an almost surgical reading of the notoriously difficult text, marrying pedagogical clarity with patient rigor and acting as a lucid guide through the thickets of Heidegger’s prose. At this time in intellectual history, Heidegger was still somewhat unfamiliar to French readers, and Being and Time had only been partially translated into French. Here Derrida mostly uses his own translations, giving his own reading of Heidegger that directly challenges the French existential reception initiated earlier by Sartre. He focuses especially on Heidegger’s Destruktion (which Derrida would translate both into “solicitation” and “deconstruction”) of the history of ontology, and indeed of ontology as such, concentrating on passages that call for a rethinking of the place of history in the question of being, and developing a radical account of the place of metaphoricity in Heidegger’s thinking.

This is a rare window onto Derrida’s formative years, and in it we can already see the philosopher we’ve come to recognize—one characterized by a bravura of exegesis and an inventiveness of thought that are particularly and singularly his.

Jacques Derrida (1930–2004) was director of studies at the École des hautes études en sciences sociales, Paris, and professor of humanities at the University of California, Irvine. Several of his books have been published in their English translation by the University of Chicago Press.

Geoffrey Bennington is the Asa G. Candler Professor of Modern French Thought at Emory University. He is the author of several books on Derrida and translator of many others by him, and he is coeditor of The Seminars of Jacques Derrida series.

“For those who are prepared, this text makes for absorbing reading. . . . Because it dates from the early years of Derrida’s career and because it is a series of classroom lectures, this book serves as a helpful preparation for reading the more intricate and playful texts that he published in the late 1960s and beyond. It also shows just how indebted Derrida is to Heidegger.”

“The publication of Derrida’s 1964–65 seminar on Martin Heidegger’s Being and Time is a philosophical event of great significance. Despite dozens of detailed analyses, Being and Time remains one of the most misread books of the twentieth century. Humanist, anthropological, analytic, and transcendental-mystical readings have occluded the profoundly atheistic, ‘ek-sistent’ thing that is Dasein. Derrida’s penetrating reconstruction of Heidegger’s revolutionary ‘aporetic style’ illuminates Being and Time and the entirety of Derrida’s own oeuvre. Although Derrida did not publish this seminar, its traces pervade the issues that dominated his thinking. Derrida’s greatest insights into Heidegger’s thinking are announced here: being is neither a ‘cosmic ground’ nor ‘the highest being,’ the metaphors for being can never be stabilized by a logic, the ‘mystery of Geschehen [originary movement]’ marks an absolute temporal concealment, the ‘destruction of ontology’ is the work of ontology itself, the history of being is history itself. Derrida’s focus is on the opening and closing sections of Being and Time, Heidegger’s Introduction to Metaphysics, his ‘Letter on Humanism’, and texts by Hegel, Nietzsche, and Husserl. This brilliantly translated seminar is required reading for students of Heidegger and Derrida. . . . Summing up: Essential.”

"Heidegger: The Question of Being and History certainly (re)familiarizes Anglophone readers with the essentially historical orientation of Derrida’s philosophical project. Given at the start of his remarkable career, at the age of thirty-four, and originally delivered over the course of nine sessions during the 1964- 1965 academic year at the École Normale Supérieure (ENS), Derrida’s seminar offers a wealth of insights into the ways his published views on history fundamentally emerged out of a critical engagement with the introduction and the final sections of Martin Heidegger’s 1927 Being and Time."
— H-France Review