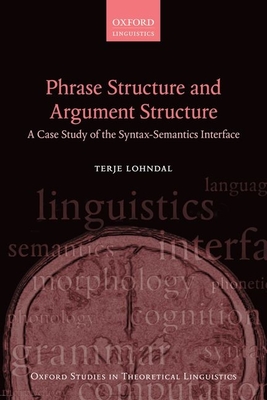 This book focuses on the relationship between syntax and meaning. Terje Lohndal's core claim is that it is possible to create a transparent mapping from syntax to logical form such that each syntactic Spell-Out domain directly corresponds to a conjunct at logical form. The argument focuses on two domains of grammar - phrase structure and argument structure - and brings together two independently established but seemingly unconnected hypotheses: that verbs do not require arguments, and that specifiers are not required by the grammar. Following the introduction, the second chapter looks in detail at the separation of the verb from its thematic arguments, and presents data from argument structure, reciprocals, and adjectival passives, while the third examines the claim that specifiers do not play a role as the target of various grammatical operations. Chapter 4 then brings these arguments together and proposes a syntax that maps transparently onto logical forms where all thematic arguments are severed from the verb. Moreover, the broader consequences of this approach are outlined in terms of Spell-Out, movement, linearization, thematic uniqueness, and agreement. The book closes with an examination of the relationship between grammatical and conceptual meaning, and a detailed discussion of the nature of compositionality.

Terje Lohndal is Associate Professor of English Linguistics at the Norwegian University of Science and Technology. He got his PhD from the University of Maryland in 2012, and has worked extensively on syntax and the syntax-semantics interface. His work has appeared in journals such as Linguistic Inquiry, Journal of Linguistics, and Journal of Semantics.