Beer: A Global Journey Through the Past and Present (Hardcover) 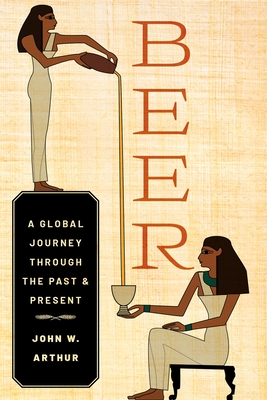 A fascinating exploration of beer, ancient and contemporary, and its role in shaping human society Beer is and has always been more than an intoxicating beverage. Ancient beer produced in the Near East, Asia, Africa, Europe, and the Americas was a food that had a remarkable role in shaping the development of agriculture and some of the earliest state-level societies. Its invention 13,000 years
ago was one of the fundamental motivations for the domestication of grains around the world. In early states, the control over the technological knowledge and resources to produce beer contributed to social hierarchies. Beer even likely provided the capital to motivate laborers to construct the
ancient pyramids and other large-scale public works. The fermentation of beer also provided a healthy and safe alternative to the contaminated drinking water in early states and it continues to do so among rural Indigenous populations today. Beer is a social lubricant that brings people together
and, in many Indigenous societies both past and present, is a gift connecting people to their ancestors. The same innovations pioneered by ancient brewers are transforming the types of ingredients and flavors produced by the global craft beer industry. In Beer, archaeologist John W. Arthur takes readers on an exciting global journey to explore the origins, development, and recipes of ancient beer. This unique book focuses on past and present non-industrial beers, highlighting their significance in peoples' lives through four themes: innovating new
technologies, ensuring health and well-being, building economic and political statuses, and imbuing life with ritual and religious connections. As this book amply illustrates, beer has shaped our world in remarkable ways for the past 13,000 years.

John W. Arthur is Professor of Anthropology at the University of South Florida in St. Petersburg. He was recently named a fellow in the illustrious Explorers Club. He is also a citizen of the Choctaw Nation of Oklahoma.