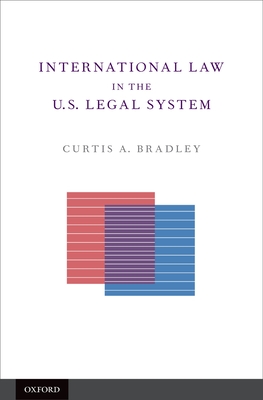 International Law in the U.S. Legal System explores the dynamic intersection between international law and the domestic legal system within the United States and covers both settled principles as well as unresolved issues and areas of controversy. Curtis Bradley considers all of the principal forms of international law: treaties, decisions and orders of international institutions, customary international law, and jus cogens norms. He also explores a number of specific topics that are implicated by the intersection of U.S. law and international law, such as foreign sovereign immunity, international human rights litigation, extradition, war powers, and extraterritoriality. As he explains, international law plays an important and sometimes under-appreciated role in the U.S. legal system, but its domestic application is mediated by a variety of structural considerations, including federalism and the separation of powers. This book highlights recent decisions and events relating to the topic (including decisions and events arising out of the war on terrorism), while also taking into account relevant historical materials, including materials relating to the U.S. constitutional founding. The book is designed to be accessible to a wide range of lawyers, judges, law students, and policymakers, both inside and outside the United States.

Curtis Bradley is the William Van Alstyne Professor of Law at Duke University School of Law in the United States. Professor Bradley has been writing and teaching about international law and its status in the U.S. legal system for almost twenty years. In addition to publishing numerous scholarly articles in top law journals, he is the co-author of a leading casebook on U.S. foreign relations law. He has also served as the Counselor on International Law in the Legal Adviser's Office of the U.S. State Department and currently is a member of the Secretary of State's Advisory Committee on International Law. Professor Bradley is also a Vice-President of the American Society of International Law and a member of the Board of Editors of the American Journal of International Law.