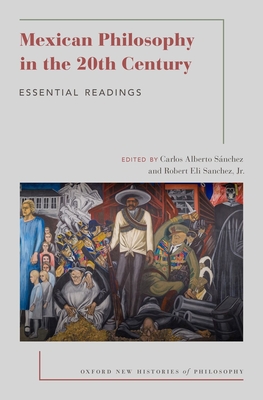 S nchez and Sanchez have selected, edited, translated, and introduced some of the most influential texts in Mexican philosophy, which constitute a unique and robust tradition that will challenge and complicate traditional conceptions of philosophy. The texts collected here are organized
chronologically and represent a period of Mexican thought and culture that emerged from the Mexican Revolution of 1910 and which culminated in la filosof a de lo mexicano (the philosophy of Mexicanness). Though the selections reflect on a variety of philosophical questions, collectively they
represent a growing tendency to take seriously the question of Mexican national identity as a philosophical question--especially given the complexities of Mexico's indigenous and European ancestries, a history of colonialism, and a growing dependency on foreign money and culture. More than an
attempt to describe the national character, however, the texts gathered here represent an optimistic period in Mexican philosophy that aimed to affirm Mexican culture and philosophy as a valuable, if not urgent, contribution to universal culture.