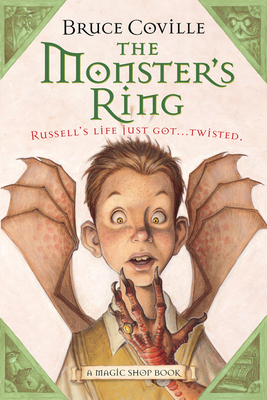 This is book number 1 in the Magic Shop Book series.

Russell is sure that the ring he gets at Mr. Elives' shop is just a silly magic trick, but he follows the instructions and twists the ring twice anyway—and becomes a monster!

Katherine Coville is an artist as well as an author. Books she has illustrated include Aliens Ate My Homework and Sarah’s Unicorn, both by written her husband, Bruce Coville. Books she has written include Ivy, The Cottage in the Woods, and Briar, Rose, and Jack. She lives in Syracuse, New York, with a varying assortment of pets and children.

"This lively tale . . . is more than just another story about [Halloween]. . . . It is a good book that will appeal, at any time, to anyone who, like Russell, is 'very fond of monsters.'"—The New York Times Book Review "The mix of monsters, magic, and Halloween has a built-in appeal."—Booklist  "Bruce Coville's story is a Halloween romp, with Katherine Coville's illustrations revving up the chills and giggles . . . a junior Jekyll and Hyde."—Publishers Weekly  • ABA's Pick of the Lists • Children's Choice Award Nominee (in four states) • IRA Children's Choice