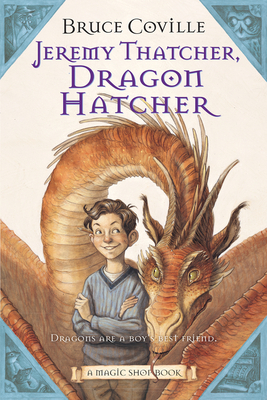 This is book number 2 in the Magic Shop Book series.

The funny classic middle grade book about a boy who accidentally hatches a dragon.

Sixth grader Jeremy Thatcher discovers a strange magic shop he has never seen before. He enters, and his life is changed forever.

After he leaves Mr. Elives’ magic shop with a strange marbled egg, it soon becomes clear that this is one pet he wasn’t prepared for! How is he supposed to keep a flame-breathing dragon with razor-sharp teeth and an out-of-control appetite in his bedroom?

But if the playful baby dragon is ever to grow up to become a magnificent beast of myth and legend, it needs Jeremy. And though he doesn’t know it yet, Jeremy needs a dragon.

* "A funny, enjoyable, imaginative story whose serious undercurrents lend it unexpected depth."—Kirkus Reviews, starred review "Not only is the story involving but the reader can really get a feeling for Jeremy as a person."—VOYA "Will bring laughter and near tears to readers. . . . Dragons really exist for a little while."—School Library Journal Children's Choice Award Nominee (in sixteen states)
IRA Teachers' Choice
—