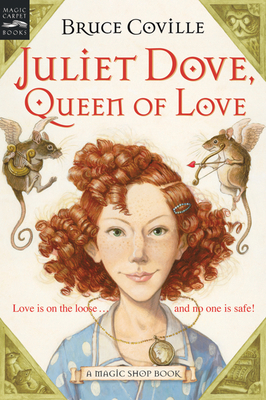 This is book number 5 in the Magic Shop Book series.

Juliet Dove is a girl who doesn't like to be noticed. But though she may be shy, she has a wickedly sharp wit. Whenever someone does take notice of her, she tears into the person with a savagery that's earned her the nickname Killer.

Juliet ends up leaving Mr. Elives' magic shop with Helen of Troy's amulet—that is, a virtual man magnet. Juliet doesn't know what she's got, but the boys in her class do—they start to notice her. Soon every boy in town is swoony for her. Yet, much as she'd like to lose all the unwanted attention, she can't: The amulet won't come off!

A sidesplittingly funny, heartbreaking whirlwind of a book about the high cost of loving, from the award-winning author of My Teacher Is an Alien and The Unicorn Chronicles.

"Coville's easy style works well in a tale that has its share of both humor and heartache."—Booklist  "Surprising depth, with musings on honor, power, strength, courage, and, above all, love . . . Interweaves mythological characters with realistic modern ones, keeping readers truly absorbed."—School Library Journal
—