Losers: Dispatches from the Other Side of the Scoreboard (Paperback) 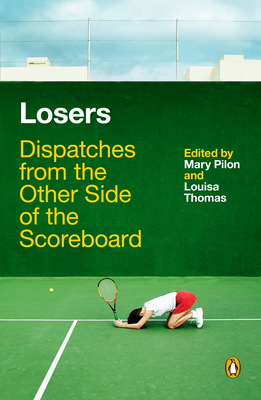 By Mary Pilon (Editor), Louisa Thomas (Editor)
$17.00
ON HAND in at least ONE of our stores. Click through or call for up-to-the-minute availability.

“It's easy to do anything in victory. It’s in defeat that a man reveals himself.” —Floyd Patterson

Twenty-two notable writers—including Bob Sullivan, Abby Ellin, Mike Pesca, Sir Arthur Conan Doyle, Louisa Hall, and Gay Talese—examine the untold stories of the losers, and in doing so reveal something raw and significant about what it means to be human

The locker rooms of winning teams are crowded with coaches, family, and fans. Reporters flock to the athletes, brimming with victory and celebration, to ask, How does it feel? In contrast, the locker rooms of the losing teams are quiet and awkward, and reporters tend to leave quickly, reluctant to linger too long around loss.

But, as sports journalists Mary Pilon and Louisa Thomas argue, losing is not a phenomenon to be overlooked, and in Losers, they have called upon novelists, reporters, and athletes to consider what it means to lose. From the Olympic gymnast who was forced to surrender her spot to another teammate, to the legacy of Bill Buckner's tenth-inning error in the 1986 World Series, to LeBron James's losing record in the NBA Finals, these essays range from humorous to somber, but all are united by their focus on defeat. Interweaving fourteen completely new and unpublished pieces alongside beloved classics of the genre, Losers turns the art of sports writing on its head and proves that there is inspiration to be found in stories of risk, resilience, and getting up after you've been knocked down.

Mary Pilon is the author of the New York Times bestseller The Monopolists and The Kevin Show. She regularly contributes to The New Yorker, Esquire, Fast Company, MSNBC, Vice, and Politico, Pilon has also worked as a staff reporter at the New York Times and the Wall Street Journal.

Louisa Thomas is the author of Louisa: The Extraordinary Life of Mrs. Adams and Conscience: Two Soldiers, Two Pacifists, One Family -- A Test of Will and Faith in World War I, and the coauthor of Mind and Matter: A Life in Math and Football. A staff writer at The New Yorker and a former writer and editor for Grantland, her writing has appeared in The New Yorker, The Atlantic, The New York Times, Vogue, and other places.

Both Mary and Louisa have been laid off from sports reporting gigs and lost a variety of sporting events throughout their careers.

"Packed with insight; each essay brings a new and different perspective to the idea of losing. . . . Losers is a sports book, but it is also more than that. These essays offer a way to engage with the human condition; there’s a real empathy inspired by these pieces, whether we’re talking about Olympic gymnasts or heavyweight boxers or aging bullfighters. . . . This time, history is written by the losers."—The Main Edge

“If sports do in fact show us the best of the human spirit, that revelation lies not in championships and victory but in the cold morning of defeat. This book chronicles how human beings respond to failure, how they rise and try again, because that’s what living is. It is essential reading — and the self-examination it prompts is essential, too.”—Wright Thompson, author of The Cost of These Dreams

“Without the threat of loss, there is no meaning in sport. This new and thrillingly varied collection is as essential as the turf beneath your cleats.”—Ben McGrath, staff writer for The New Yorker

“Pilon and Thomas explore the significance losing and defeat has on the lives of athletes and fans in this thoughtful anthology. . . . A stirring tribute to losing, one of life’s greatest teachers.” —Publishers Weekly

"A few of the bylines [in Losers] are well known, especially Gay Talese and Arthur Conan Doyle. Refreshingly, though, most of the contributors are less well known to general readers, and their subjects range from obscure to famous. . . . As a collection, the book holds together well even for non–sports fans. . . . In the introduction, the editors write, 'this book is for the losers—which is to say, for all of us.' They deliver." —Kirkus