How to Watch Soccer (Paperback) 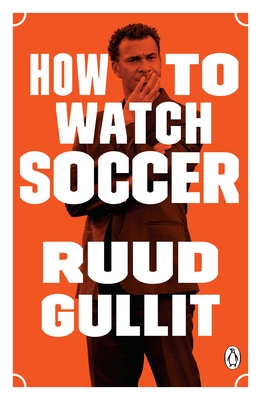 An opinionated masterclass in the art and science of “reading” a match from one of professional soccer’s most respected and beloved international figures.

Ruud Gullit knows better than anyone else that to understand soccer you have to understand strategy. When he started playing soccer, his only “strategy” was to get the ball, outrun everyone else to the other end of the field, and score. At first it served him well, but as he advanced through the sport, he learned that it takes much more than one player's speed to make a winning team. Over the course of his career, he worked his way from the Dutch junior leagues all the way to the legendary AC Milan, eventually retiring from the field to be a trainer, then a manager, and finally a commentator. Each step came with its own lessons, and its own unique perspective on the game. Now, having looked at soccer through every lens possible, Gullit shares his own perspective.

Most spectators simply watch the ball, but in How to Watch Soccer, Gullit explains how to watch the whole game. He shows how every part of a match, from formations to corner kicks, all the way down to what the players do to influence the referees, is important. And he uses his own vast experience to illustrate each point, so his lessons are filled with anecdotes from his years on the field and insights from his observations as a manager and commentator. This exhaustive guide will change the way even the most die-hard fan watches the beautiful game.

Ruud Gullit was born in Amsterdam in 1962. He was the captain of the Netherlands team that won the 1988 European Football Championship and played in the 1990 World Cup. He was named “European Footballer of the Year” in 1987 and “World Soccer Player of the Year” in 1987 and 1989. After he retired from the field, he managed the LA Galaxy and several other teams around the world. He currently works as a broadcaster, regularly covering soccer matches on TV in the U.S., the U.K., Germany, France, the Netherlands, and across the Middle East.

“HOW TO WATCH SOCCER is partly a memoir.... But this is no dishy, celebrity tell-all. Mr. Gullit earnestly plods down the path of enlightening the American audience.” —Wall Street Journal

"If you’re new to watching soccer, Gullit offers a good primer on what to watch for; if you’re more well-versed with the sport, there’s still plenty of insight to be found here" —Men's Journal

“Using myriad—though never gratuitous or self-indulgent—examples from his own career as a player and manager, Gullit peels below the surface and encourages readers to do more than simply watch the ball…. A passionate insider's approach to understanding a game that seems so simple but contains almost inexhaustible complexity.” —Kirkus Reviews

"Gullit’s remarkable insight blends personal experience at all levels to create a unique way to look at soccer and see the how and why of matches [...] this is an ideal book for both novices or fully devoted fans to enrich viewing or simply following the sport internationally" —Library Journal

"Ruud Gullit manages to convey the sense that football is really quite simple if you’re a genius like him, but without actually being annoying. A rare talent"  —Metro

"Ruud Gullit was the best player in the world. His sheer energy could create chances"—David Winner, Author of Brilliant Orange: The Neurotic Genius of Dutch Football