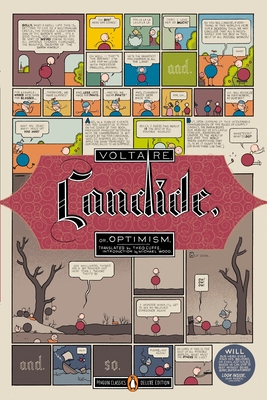 By Francois Voltaire, Theo Cuffe (Translated by), Michael Wood (Introduction by), Chris Ware (Illustrator)
$17.00
NOT on our shelves now. Usually ships from warehouse in several days.

With its vibrant new translation, perceptive introduction, and witty packaging, this new edition of Voltaire’s masterpiece belongs in the hands of every reader pondering our assumptions about human behavior and our place in the world. Candide tells of the hilarious adventures of the naïve Candide, who doggedly believes that “all is for the best” even when faced with injustice, suffering, and despair. Controversial and entertaining, Candide is a book that is vitally relevant today in our world pervaded by—as Candide would say—“the mania for insisting that all is well when all is by no means well.”

Voltaire, was born in 1694. For twenty years Voltaire lived chiefly away from Paris. In this, his most prolific period, he wrote such satirical tales as “Zadig” (1747) and “Candide” (1759). He died in 1778. Theo Cuffe translated Voltaire’s Micromégas and Other Short Fictions for Penguin Classics. Michael Wood is the writer and presenter of many critically acclaimed series on television, including In the Footsteps of Alexander the Great and its accompanying book.

Winner of the 2012 Fifty Books/Fifty Covers show, organized by Design Observer in association with AIGA and Designers & Books

"[Penguin Drop Caps] convey a sense of nostalgia for the tactility and aesthetic power of a physical book and for a centuries-old tradition of beautiful lettering."
—Fast Company

"The Penguin Drop Caps series is a great example of the power of design. Why buy these particular classics when there are less expensive, even free editions of Great Expectations? Because they’re beautiful objects. Paul Buckley and Jessica Hische’s fresh approach to the literary classics reduces the design down to typography and color. Each cover is foil-stamped with a cleverly illustrated letterform that reveals an element of the story. Jane Austen’s A (Pride and Prejudice) is formed by opulent peacock feathers and Charlotte Bronte’s B (Jane Eyre) is surrounded by flames. The complete set forms a rainbow spectrum prettier than anything else on your bookshelf."
—Rex Bonomelli, The New York Times