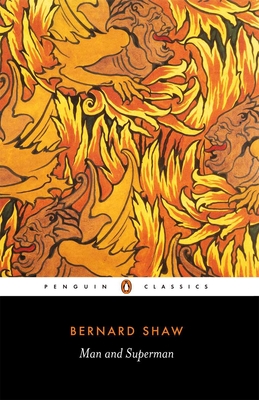 By George Bernard Shaw, Dan H. Laurence (Editor), Stanley Weintraub (Introduction by)
$15.00
ON HAND in at least ONE of our stores. Click through or call for up-to-the-minute availability.

Exclusive to Penguin Classics: the definitive text of the first great twentieth-century English play and a classic exposé of the eternal struggle between the sexes—part of the official Bernard Shaw Library

After the death of her father, Ann Whitefield becomes the joint ward of two men: the respectable Roebuck Ramsden and John Tanner, author of “The Revolutionist’s Handbook.” Believing marriage would prevent him from achieving his higher intellectual and political ambitions, Tanner is horrified to discover that Ann intends to marry him, and he flees to Spain with the determined young woman in hot pursuit. The chase even leads them to the underworld, where the characters’ alter egos discuss questions of human nature and philosophy in a lively debate in a scene often performed separately as “Don Juan in Hell.” In Man and Superman, Shaw combined seriousness with comedy to create a satirical and buoyant exposé of the eternal struggle between the sexes.

This is the definitive text produced under the editorial supervision of Dan H. Laurence. The volume also includes Shaw’s preface of 1903 and his appendix, “The Revolutionist’s Handbook”; the cast list from the first production of Man and Superman; and a list of his principal works.

George Bernard Shaw (1856–1950) is one of the world’s greatest literary figures. Born in Dublin, Ireland, he left school at fourteen and in 1876 went to London, where he began his literary career with a series of unsuccessful novels. In 1884 he became a founder of the Fabian Society, the famous British socialist organization. After becoming a reviewer and drama critic, he published a study of the Norwegian dramatist Henrik Ibsen in 1891 and became determined to create plays as he felt Ibsen did: to shake audiences out of their moral complacency and to attack social problems. However, Shaw was an irrepressible wit, and his plays are as entertaining as they are socially provocative. Basically shy, Shaw created a public persona for himself: G.B.S., a bearded eccentric, crusading social critic, antivivisectionist, language reformer, strict vegetarian, and renowned public speaker. The author of fifty-three plays, hundreds of essays, reviews, and letters, and several books, Shaw is best known for Widowers’ Houses, Mrs. Warren’s Profession, Arms and the Man, Caesar and Cleopatra, Man and Superman, Major Barbara, Pygmalion, Heartbreak House, and Saint Joan. He was awarded the Nobel Prize in Literature in 1925.

Dan H. Laurence (series editor; 1920–2008) was series editor for the works of George Bernard Shaw in Penguin. Formerly a New York University faculty member, Mr. Laurence left his tenured position in 1970 to dedicated his life to the collection and curation of Shaw's life, work, and letters. He served as the official literary advisor to Shaw's estate and published four volumes of his correspondence.

Stanley Weintraub (introducer) teaches at the Institute of Arts and Humanistic Studies at Penn State University.

“[Shaw] did his best in redressing the fateful unbalance between truth and reality, in lifting mankind to a higher rung of social maturity. He often pointed a scornful finger at human frailty, but his jests were never at the expense of humanity.” —Thomas Mann

“Shaw will not allow complacency; he hates second-hand opinions; he attacks fashion; he continually challenges and unsettles, questioning and provoking us even when he is making us laugh. And he is still at it. No cliché or truism of contemporary life is safe from him.” —Michael Holroyd

“In his works Shaw left us his mind. . . . Today we have no Shavian wizard to awaken us with clarity and paradox, and the loss to our national intelligence is immense.” —The Sunday Times

“He was a Tolstoy with jokes, a modern Dr. Johnson, a universal genius who on his own modest reckoning put even Shakespeare in the shade.” —The Independent

“His plays were superb exercises in high-level argument on every issue under the sun, from feminism and God, to war and eternity, but they were also hits—and still are.” —The Daily Mail