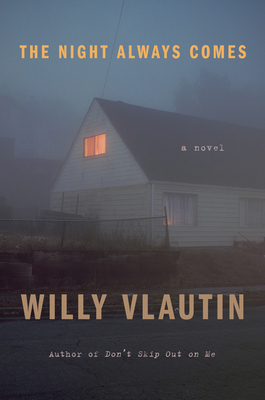 “The Night Always Comes is urgent. For two days and two nights, Lynette’s future rests on a tightly plotted race through the gentrified and changing districts of Portland as she tries to secure what she believes to be a better life for herself and for her mother and brother. Willy Vlautin writes with honesty and generosity about people who are just a step ahead of disaster. He makes us care for lives that are singularly defined by the challenge of earning a living wage while navigating the circumstances of society, family, and self. Vlautin is a necessary writer for our times.”
— Christine Kelly, Sundance Bookstore, Reno, NV

“Willy Vlautin is not known for happy endings, but there’s something here that defies the downward pull. In the end, Lynette is pure life force: fierce and canny and blazing through a city that no longer has space for her, and it’s all Portland’s loss.”—Portland Monthly Magazine

Award-winning author Willy Vlautin explores the impact of trickle-down greed and opportunism of gentrification on ordinary lives in this scorching novel that captures the plight of a young woman pushed to the edge as she fights to secure a stable future for herself and her family.

Barely thirty, Lynette is exhausted. Saddled with bad credit and juggling multiple jobs, some illegally, she’s been diligently working to buy the house she lives in with her mother and developmentally disabled brother Kenny. Portland’s housing prices have nearly quadrupled in fifteen years, and the owner is giving them a good deal. Lynette knows it’s their last best chance to own their own home—and obtain the security they’ve never had. While she has enough for the down payment, she needs her mother to cover the rest of the asking price. But a week before they’re set to sign the loan papers, her mother gets cold feet and reneges on her promise, pushing Lynette to her limits to find the money they need.

Set over two days and two nights, The Night Always Comes follows Lynette’s frantic search—an odyssey of hope and anguish that will bring her face to face with greedy rich men and ambitious hustlers, those benefiting and those left behind by a city in the throes of a transformative boom. As her desperation builds and her pleas for help go unanswered, Lynette makes a dangerous choice that sets her on a precarious, frenzied spiral. In trying to save her family’s future, she is plunged into the darkness of her past, and forced to confront the reality of her life.

A heart wrenching portrait of a woman hungry for security and a home in a rapidly changing city, The Night Always Comes raises the difficult questions we are often too afraid to ask ourselves: What is the price of gentrification, and how far are we really prepared to go to achieve the American Dream? Is the American dream even attainable for those living at the edges? Or for too many of us, is it only a hollow promise?

Willy Vlautin is the author of the novels The Motel Life, Northline, Lean on Pete, The Free, and Don’t Skip Out on Me. He is the founding member of the bands Richmond Fontaine and The Delines. He lives outside Portland Oregon.

“Vlautin offers a stunning, heartbreaking study of one woman’s struggle against fate and circumstance in an America that’s left her behind… This gritty page-turner sings with pitch-perfect prose, and [protagonist] Lynette’s desperation is palpable. Vlautin has achieved a brilliant synthesis of Raymond Carver and Jim Thompson.”
— Publishers Weekly (starred review)

“The trick to writing a great thriller is both simple and very, very difficult: make us care about the person whose life is in jeopardy. I can’t remember the last time I worried myself sick about a fictional character the way I did about Lynette in Willy Vlautin’s terrific, big-hearted new novel The Night Always Comes. You won’t soon forget either her or the fraught world she so courageously navigates.”
— Richard Russo, Author of Empire Falls and Chances Are…

“If throwing down roots in a place can change a person for the better, The Night Always Comes asks what happens to people who never get the chance to do it. Vlautin doesn't offer answers, but he does end the book on an optimistic note, suggesting hope is out there somewhere—and, in the meantime, he paints a recognizable, sometimes harrowing portrait of a city in flux.”
— Williamette Week

“Willy Vlautin’s The Night Always Comes is a tear-struck revelation—both epic and timely, intimate and clear-eyed. Only Vlautin could cross the harrowing emotional richness of A Woman Under the Influence with the breakneck desperation of the greatest of film noir. Lynette will have you from the first page and put you to the test a hundred times before the last. You’ll finish knowing you’ll never forget her.”
— Megan Abbott, Author of Give Me Your Hand and You Will Know Me

"Remarkable, real, and tender, The Night Always Comes is a story of America, of the disenfranchised and the still hopeful, of a world littered with artifacts and so little opportunity. Willy Vlautin's characters blaze with honesty, fighting for their slim chance at the American dream, leaving us to wonder if it was all a charade. An amazing achievement."
— Rene Denfeld, Author of The Butterfly Girl and The Child Finder

“I finished reading this novel dripping with admiration for Willy Vlautin and the tough wonder he has brought forth. The Night Always Comes hits the high-water mark; there is skillful and beautiful objectivity to the writing, characters so real that when they bleed you get a few drops on your sleeve, and a story of economic want and desperation and heart.”
— Daniel Woodrell, Author of Winter’s Bone and The Maid’s Version

"The story resonates, with characters we come to feel we know and dialogue that is so natural we hear it, not just read it....This is literary art that will keep readers in their seats until the last page."

"He is as far reaching as he is precise. He writes hard, delicate stories about things that are true. His characters cut me so close to the bone, I feel like they peel a layer of skin off me and I walk around after reading Willy Vlautin, more vulnerable, more open than I was before. And all the tougher for it."
— Kae Tempest, Author of On Connection

"The Night Always Comes is a masterclass of scope and scale - a nail-biting thriller of everyday survival. Relatable, terrifying, impassioned, and compassionate, Vlautin's latest will elevate you on one page and tear your heart out on the next. A marvelous novel that bleeds real, cuts deep, and offers just the right dose of hope."
— Ivy Pochoda, Author of These Girls and Visitation Street

“Emotionally wrenching.… 'You never give up and you've got a good heart, a damaged heart, but a good heart.’ We concur, of course, and race to the end to see if good hearts can maybe, just this once, make a difference. With Vlautin, you never know for sure.”
— Booklist (starred review)

“[Vlautin’s] book plays out like a modern noir take on a Tennessee Williams play, its desperate characters harboring old resentments, its hard-luck heroine settling scores throughout a long, bloody night in her hometown of Portland, Oregon…. Vlautin has written a soulful thriller for the age of soulless gentrification.”
— Kirkus Reviews (starred review)

“This is a fast and worthy read that you may end up devouring in a few sittings — it's that propulsive. "
— AARP

“Willy Vlautin is not known for happy endings, but there’s something here that defies the downward pull. In the end, Lynette is pure life force: fierce and canny and blazing through a city that no longer has space for her, and it’s all Portland’s loss. Read it and weep.”
— Portland Monthly Magazine

“Anyone who’s scrambled within the confines of poverty may relate to Lynette’s quest for agency over her own fate. With “The Night Alway Comes,” Vlautin chronicles the downfall of a city. As Lynette’s story illustrates, it’s an undoing that is deeply personal, too.”
— New York Times Book Review

“The pressures of poverty give [Vlautin’s book] its vivid unpredictability… The Night Always Comes is a taut, action-packed production with a memorable protagonist who never abandons her sense of moral truth amid the Darwinian scramble for cash.”
— Wall Street Journal

[Vlautin’s] best work yet…. The Night Always Comes is a rare example of art that matters… heartbreaking, but also a combative condemnation of American injustice, while also a love letter to the beleaguered working class, and still damn fun to read."
— Crimereads.com

'Vlautin’s finest work to date, marrying his typical deep empathy for troubled characters with a robust and dynamic plot reminiscent of classic American noir crime fiction ...  All of this is done with a prose style that sings with simple clarity, like an arrow straight at the reader’s heart. Extraordinary stuff.'
— Big Issue

'[Vlautin] has particular eye for setpieces . . . his hardscrabble characters and their vanishing dreams have the tang of authenticity.'
— Daily Mail (UK)

“[Vlautin] is one of the great chroniclers of working-class American life.”
— The Herald Magazine (Scotland)

“The Night Always Comes is both intimately heartbreaking and cautiously hopeful, as Lynette quickly adapts to pursue a new dream, one that may or may not be as elusive as the rapidly fading American dream of homeownership.”
— Bookreporter