The Making of a Miracle: The Untold Story of the Captain of the 1980 Gold Medal–Winning U.S. Olympic Hockey Team (Hardcover) 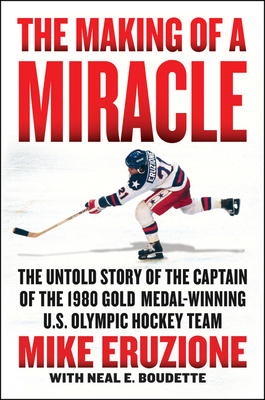 By Mike Eruzione, Neal Boudette, Al Michaels (Foreword by)
$27.99
ON HAND in at least ONE of our stores. Click through or call for up-to-the-minute availability.

On the fortieth anniversary of the historic "Miracle on Ice," Mike Eruzione—the captain of the 1980 U.S Men’s Olympic Hockey Team, who scored the winning goal—recounts his amazing career on ice, the legendary upset against the Soviets, and winning the gold medal.

It is the greatest American underdog sports story ever told: how a team of college kids and unsigned amateurs, under the tutelage of legendary coach—and legendary taskmaster—Herb Brooks, beat the elite Soviet hockey team on their way to winning the gold medal at the 1980 Lake Placid Olympics. No one believed the scrappy Americans had a real shot at winning. Despite being undefeated, the U.S.—the youngest team in the competition—were facing off against the four-time defending gold medalist Russians. But the Americans’ irrepressible optimism, skill, and fearless attitude helped them outplay the seasoned Soviet team and deliver their iconic win.

As captain, Mike Eruzione led his team on the ice on that Friday, February 22, 1980. But beating the U.S.S.R was only one of the numerous challenges Mike has faced in his life. In this inspiring memoir, he recounts the obstacles he has overcome, from his blue-collar upbringing in Winthrop, Massachusetts, to his battle to make the Boston University squad; his challenges in the minor leagues and international tournaments to his selection to the U.S. team and their run for gold. He also talks about the aftermath of that stupendous win that inspired and united the nation at a time of crisis in its history.

Eruzione has lived a hockey life full of unexpected twists and surprising turns. Al Michaels’ famous call in 1980—"do you believe in miracles? YES!"—could have been about Mike himself. Filled with vivid portraits—from his hard-working, irrepressible father to the irascible Herb Brooks to the Russian hall of famers Tretiak, Kharlamov, Makarov, and Fetisov—this lively, fascinating look back is destined to become a sports classic and is a must for hockey fans, especially those who witnessed that miraculous day.

Mike Eruzione is the director of special outreach at his alma mater, Boston University. He has been a television commentator, a motivational speaker, and a hockey coach. He lives in Winthrop, Massachusetts.

Neal Boudette, is a graduate of Boston University and a reporter for the New York Times. He lives in Ann Arbor, Michigan.

"Eruzione’s account of the game itself can’t help being entertaining, but far more interesting are the details he embroiders around the edges."
— The New York Times Book Review

“Eruzione adds an honest insider’s view of the Miracle, which will appeal to hockey fans and admirers of sports autobiographies.”
— Library Journal

“The best part of the narrative is the you-are-there, blow-by-blow account of that Lake Placid game of 1980, told with verve and a sharp eye for the right detail, which served [Eruzione] well in a later career as a sports commentator. . . . Fans of Olympic hockey will delight in Eruzione’s spirited memoir.”
— Kirkus Reviews