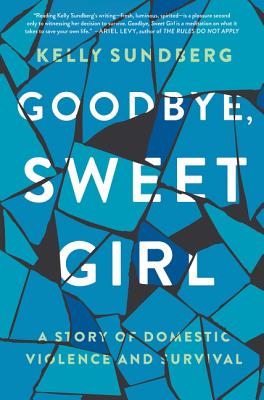 By Kelly Sundberg
$29.69
NOT on our shelves now. Usually ships from warehouse in several days.

“It is a hell of a thing to write about brutality and suffering with strength, grace, generosity and beauty. That’s precisely what Kelly Sundberg has done in her gripping memoir about marriage and domestic violence. Sundberg’s honesty is astonishing, how she laid so much of herself bare, how she did not demonize a man who deserves to be demonized. Instead, she offers a portrait of a broken man and a broken marriage and an abiding love, what it took to set herself free from it all. In shimmering, open hearted prose, she shows that it took everything."--Roxane Gay, author of Hunger and Bad Feminist

"In her stunning memoir, Kelly Sundberg examines the heart-breaking bonds of love, detailing her near decade-long marriage’s slide into horrific abuse. Sundberg shares her own confusions, fears and empathy for her violent husband, even as she comes to realize he will never change. This is an immensely courageous story that will break your heart, leave you in tears, and, finally, offer hope and redemption. Brava, Kelly Sundberg."—Rene Denfeld, author of The Child Finder

"A fierce, frightening, soulful reckoning—Goodbye, Sweet Girl is an expertly rendered memoir that investigates why we stay in relationships that hurt us, and how we survive when we leave them. Kelly Sundberg is a force. She has written the rare book that has the power to change lives."—Christa Parravani, author of Her: A Memoir

In this brave and beautiful memoir, written with the raw honesty and devastating openness of The Glass Castle and The Liar’s Club, a woman chronicles how her marriage devolved from a love story into a shocking tale of abuse—examining the tenderness and violence entwined in the relationship, why she endured years of physical and emotional pain, and how she eventually broke free.

Kelly Sundberg’s husband, Caleb, was a funny, warm, supportive man and a wonderful father to their little boy Reed. He was also vengeful and violent. But Sundberg did not know that when she fell in love, and for years told herself he would get better. It took a decade for her to ultimately accept that the partnership she desired could not work with such a broken man. In her remarkable book, she offers an intimate record of the joys and terrors that accompanied her long, difficult awakening, and presents a haunting, heartbreaking glimpse into why women remain too long in dangerous relationships.

To understand herself and her violent marriage, Sundberg looks to her childhood in Salmon, a small, isolated mountain community known as the most redneck town in Idaho. Like her marriage, Salmon is a place of deep contradictions, where Mormon ranchers and hippie back-to-landers live side-by-side; a place of magical beauty riven by secret brutality; a place that takes pride in its individualism and rugged self-sufficiency, yet is beholden to church and communal standards at all costs.

Mesmerizing and poetic, Goodbye, Sweet Girl is a harrowing, cautionary, and ultimately redemptive tale that brilliantly illuminates one woman’s transformation as she gradually rejects the painful reality of her violent life at the hands of the man who is supposed to cherish her, begins to accept responsibility for herself, and learns to believe that she deserves better.

Kelly Sundberg’s essays have appeared in Guernica, Gulf Coast, The Rumpus, Denver Quarterly, Slice, and others. Her essay “It Will Look Like a Sunset” was selected for inclusion in The Best American Essays 2015, and other essays have been listed as notables in the same series. She has a PhD in creative nonfiction from Ohio University and has been the recipient of fellowships or grants from Vermont Studio Center, A Room of Her Own Foundation, Dickinson House, and the National Endowment for the Arts.

“Goodbye, Sweet Girl is heartbreaking, breathtaking in its scope, and urgently truthful in its harrowing and tender examination of when empathy fails—and when it wins.”
— Los Angeles Review

“Kelly Sundberg’s lyrical, devastating 2014 essay about domestic violence, “It Will Look Like a Sunset,” made readers hold their collective breath. It’s now expanded into a full-length memoir about Sundberg’s husband, a man who was wonderful and violent at turns.”
— Elle, The 30 Best Books to Read This Summer

“Goodbye Sweet Girl is a beautiful, devastating, and nuanced story of domestic abuse and escape that does true justice to the experiences of the victims without judgment or criticism of their choices.”
— Bustle

“Goodbye, Sweet Girl, bursting with such heartfelt, beautifully crafted scenes, is a gift for those who’ve experienced the pain of growing up and out of abusive relationships and a guide for those who seek insight and understanding.”
— New York Journal of Books

“Kelly Sundberg gives one of the most brave and beautifully written accounts of a marriage gone wrong in her memoir, Goodbye, Sweet Girl. Sundberg looks at both the tenderness and the violence of her abusive marriage, while also analyzing why women remain too long in dangerous relationships.”
— Brooklyn Digest

“[Goodbye, Sweet Girl helps us] to better understand each of our nuances and complexities, how any of us rationalizes our decisions, and how we find the courage to take care of ourselves and to speak our truths…. [Sundberg writes] her truth with a deep sense of compassion.”
— The Millions

“Goodbye, Sweet Girl is a story of domestic violence and survival, written by Kelly Sundberg, who experienced abuse at the hands of her husband. A strong and empowering memoir, the layers of Sundberg’s life are utterly inspiring.”
— Women.com, 15 Awesome Books With Strong Female Protagonists

“A fierce, frightening, soulful reckoning-- Goodbye, Sweet Girl is an expertly rendered memoir that investigates why we stay in relationships that hurt us, and how we survive when we leave them. Kelly Sundberg is a force. She has written the rare book that has the power to change lives.”
— Christa Parravani, author of Her: A Memoir

“Reading Kelly Sundberg’s writing—fresh, luminous, spirited—is a pleasure second only to witnessing her decision to survive. Goodbye Sweet Girl is a meditation on what it takes to save your own life.”
— Ariel Levy

“In this powerful debut memoir, Sundberg delivers a harrowing account of an abusive marriage and how she left it....Sundberg cogently ties together the painful chain of events in her life and the personal growth that resulted from it.”
— Publishers Weekly