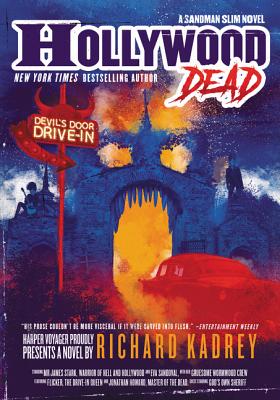 By Richard Kadrey
$16.99
ON HAND in at least ONE of our stores. Click through or call for up-to-the-minute availability.

This is book number 10 in the Sandman Slim series.

James Stark is back from Hell, trailing more trouble in his wake. To return to L.A., he had to make a deal with the evil power brokers, Wormwood—an arrangement that came with a catch. While he may be home, Stark isn’t quite himself . . . because he’s only partially alive.

There’s a time limit on his reanimated body, and unless Stark can find the people targeting Wormwood, he will die again—and this time there will be no coming back. Even though he’s armed with the Room of Thirteen Doors, Stark knows he can’t find Wormwood’s enemies alone. To succeed he’s got to enlist the help of new friends—plus a few unexpected old faces.

Stark has been in dangerous situations before—you don’t get named Sandman Slim for nothing. But with a mysterious enemy on the loose, a debt to pay, and a clock ticking down, this may truly be the beginning of his end. . . .

“Kadrey is writing a new Sandman Slim novel every year, and it’s not like he’s short of material: his winning formula of mixing deadpan, hilarious hard-boiled swearing and zero-fucks-given attitude with painstakingly researched apocrypha, daemonology and magick could yield up dividends forever.”
— Boing Boing

“[A] terrifically over-the-top [...] magical slugfest. [...] The nonstop action and dark humor will thrill urban fantasy fans, including those new to the series.”
— Publishers Weekly

“Author Richard Kadrey has the unique ability to make magic, gods, and the supernatural real. The dark, gritty L.A. vibe is genuine; the prose and sarcastic humor are real life-speak. He’s the master of his craft!”
— Suspense Magazine