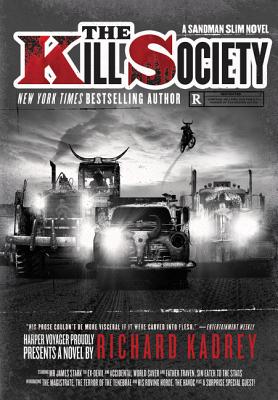 By Richard Kadrey
$28.59
NOT on our shelves now. Usually ships from warehouse in several days.

This is book number 9 in the Sandman Slim series.

Sandman Slim returns in this stunning, high-octane ninth thriller in the series, filled with the intense, kick-ass action and inventive fantasy that are the hallmarks of New York Times bestselling author Richard Kadrey.

Sandman Slim has been to Heaven and Hell and many places in between, but now he finds himself in an unknown land: the far, far edge of the Tenebrae, the desolate home of the lost dead. Making his way inland with nothing but his unerring instinct for trouble to guide him, he collides with a caravan of the damned on a mysterious crusade, led by the ruthless Magistrate. Alone and with no clue how to get back home, he throws in with this brutal bunch made up of human souls, Hellion deserters, rogue angels—and Father Traven.

Slim didn’t land in Tenebrae by chance. His little stunt of trying to open Heaven has set off a tsunami across the universe. Now, the afterlife is falling apart because of the ensuing warfare. And when Heaven finds out Slim is close by, the angels put a fat bounty on his head.

It’s one thing to ride with a ferocious criminal pack across the treacherous plains—it’s another to do it when everyone in the land of the dead is itching to keep you there permanently. But Slim’s not too worried. He’s been fighting cosmic forces bent on destroying Heaven, Hell, Earth, and him for years. A pack of vicious bounty hunters, vengeful angels, and dangerous enemies with friendly smiles isn’t going to stop him fixing the chaos he’s caused . . . one way or another.

“Every time I imagine that Richard Kadrey has run out of ends-of-all-creation to torture his long-running, hard-boiled supernatural antihero Sandman Slim with, he surprises me...and with the [ninth] volume in the series, The Kill Society, Kadrey pulls out all the stops.”
— Cory Doctorow, author of Walkaway

“A welcome return to form and a wildly entertaining bridge to bring Stark back from the brink.”
— Kirkus Reviews

“Kadrey’s Sandman Slim series just keeps getting better, and this ninth installment packs some of the darkest twists and blackest humor yet...With plenty of gruesomely fascinating characters, visceral descriptions and a final shocking showdown, this is a sensational installment to a fiendishly good series.”
— RT Book Reviews

“It’s a testament to Kadrey’s mastery of the craft that, even after nine books, I still read the final page and am immediately anxious for more.”
— GeekDad