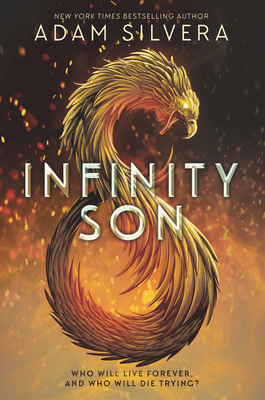 This is book number 1 in the Infinity Cycle series.

Balancing epic and intensely personal stakes, bestselling author Adam Silvera’s Infinity Son is a gritty, fast-paced adventure about two brothers caught up in a magical war generations in the making.

Growing up in New York, brothers Emil and Brighton always idolized the Spell Walkers—a vigilante group sworn to rid the world of specters. While the Spell Walkers and other celestials are born with powers, specters take them, violently stealing the essence of endangered magical creatures.

Then, in a brawl after a protest, Emil manifests a power of his own—one that puts him right at the heart of the conflict and sets him up to be the heroic Spell Walker Brighton always wanted to be.

Adam Silvera is the number one New York Times bestselling author of More Happy Than Not, History Is All You Left Me, They Both Die at the End, Infinity Son, Infinity Reaper, and—with Becky Albertalli—What If It’s Us. He was named a Publishers Weekly Flying Start for his debut. Adam was born and raised in the Bronx. He was a bookseller before shifting to children’s publishing and has worked at a literary development company and a creative writing website for teens and as a book reviewer of children’s and young adult novels. He is tall for no reason and lives in Los Angeles. Visit him online at www.adamsilvera.com.

“With its raw, complex characters, Silvera's latest packs his signature high-stakes emotionalism alongside a politically charged premise. A bright spark of a promising series.” — Kirkus Reviews

“Silvera has created an exciting fantasy series opener. Fans of Cassandra Clare…will love this magical book that embodies it all.” — School Library Journal

"With Infinity Son, Adam Silvera has created an immersive, mind-bending world built around a sibling relationship that is both thoughtful and heart-wrenching." — Sabaa Tahir, #1 New York Times bestselling author of An Ember in the Ashes

"Adam Silvera has crafted an urban fantasy so intricate, so woven into our hyperconnected modern world and everyday issues, you'll swear the Spell Walkers of New York are real. A magical joyride with a cast full of heart." — Marie Lu, #1 New York Times bestselling author of Warcross