The Berenstain Bears Take-Along Storybook Set: Dinosaur Dig, Go Green, When I Grow Up, Under the Sea, The Tooth Fairy (Paperback) 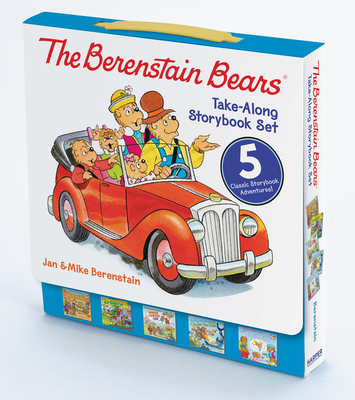 The Berenstain Bears Take-Along Storybook Set is a compilation of five heartwarming 8x8 stories from the classic New York Times bestselling series. A great value that will provide hours of storytime fun.

This hardcover collection includes the complete text and art from five favorite books:

Young readers will enjoy reading about Papa, Mama, Brother, Sister, and Honey Bear and their many adventures in Bear Country, complete with vivid and classic illustrations.

Stan and Jan Berenstain were already successful cartoonists for magazines and adult humor books when they began writing children's books. The first story starring the bear family, The Big Honey Hunt, appeared in 1962. Since then, more than 370 Berenstain Bears books have been published, and more than 300 million copies have been sold. What began as an idea sparked by their young sons' love of reading has become over the years arguably the best-selling children's book series ever.

Since their inception, the Berenstain Bears stories have expanded to include picture books, beginning readers, and chapter books--even a hit TV show on PBS. Writing and illustrating the books has become a Berenstain family affair. Mike joined with his parents as a creative team in the late 1980s. The Bear family has expanded over the years as well. Sister Bear arrived in 1974, and baby Honey joined the family in 2000.

Though Stan died in 2005 and Jan in 2012, Mike continues to create the delightful Berenstain Bear adventures from his studio in Pennsylvania.