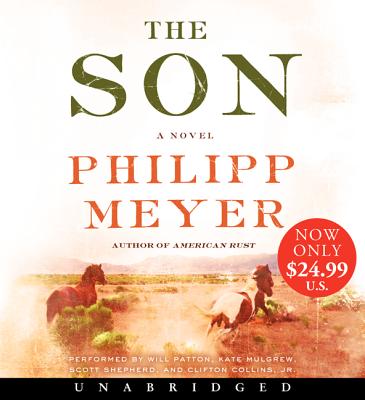 Soon to be a TV Series on AMC starring Pierce Brosnan and co-written by Philipp Meyer.

The critically acclaimed, New York Times bestselling epic, a saga of land, blood, and power that follows the rise of one unforgettable Texas family from the Comanche raids of the 1800s to the oil booms of the 20th century.

Part epic of Texas, part classic coming-of-age story, part unflinching examination of the bloody price of power, The Son is a gripping and utterly transporting novel that maps the legacy of violence in the American west with rare emotional acuity, even as it presents an intimate portrait of one family across two centuries.

Eli McCullough is just twelve-years-old when a marauding band of Comanche storm his Texas homestead and brutally murder his mother and sister, taking him as a captive. Despite their torture and cruelty, Eli--against all odds—adapts to life with the Comanche, learning their ways, their language, taking on a new name, finding a place as the adopted son of the chief of the band, and fighting their wars against not only other Indians, but white men, too-complicating his sense of loyalty, his promised vengeance, and his very understanding of self. But when disease, starvation, and westward expansion finally decimate the Comanche, Eli is left alone in a world in which he belongs nowhere, neither white nor Indian, civilized or fully wild.

Deftly interweaving Eli’s story with those of his son, Peter, and his great-granddaughter, JA, The Son deftly explores the legacy of Eli’s ruthlessness, his drive to power, and his life-long status as an outsider, even as the McCullough family rises to become one of the richest in Texas, a ranching-and-oil dynasty of unsurpassed wealth and privilege.

Harrowing, panoramic, and deeply evocative, The Son is a fully realized masterwork in the greatest tradition of the American canon-an unforgettable novel that combines the narrative prowess of Larry McMurtry with the knife edge sharpness of Cormac McCarthy.

Philipp Meyer is the author of the critically lauded novel American Rust, winner of the 2009 Los Angeles Times Book Prize. It was an Economist Book of the Year, a Washington Post Top Ten Book of the Year, and a New York Times Notable Book. He is a graduate of Cornell University and has an MFA from the University of Texas at Austin, where he was a James Michener Fellow. A native of Baltimore, he now lives mostly in Texas.

Kate Mulgrew, a native of Dubuque, Iowa, is an actress and author with an extensive career on stage and screen. From her start as Mary Ryan, the lead role on the popular soap opera Ryan's Hope to the groundbreaking first female starship captain on Star Trek: Voyager to her acclaimed performance as Galina "Red" Reznikov on Netflix's smash hit Orange Is The New Black, Kate brings a formidable presence and deep passion to all her projects. Her 2016 book, Born With Teeth, allowed her to add "New York Times bestselling author" to her resume.