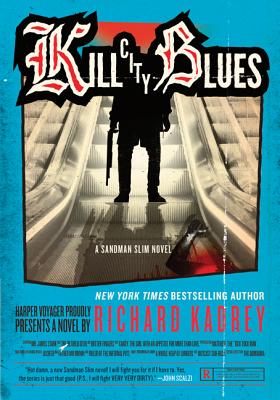 By Richard Kadrey
$14.99
NOT on our shelves now. Usually ships from warehouse in several days.

This is book number 5 in the Sandman Slim series.

James Stark, aka Sandman Slim, has lost the Qomrama Om Ya, an all-powerful weapon from the banished older gods. Older gods who are returning and searching for their lost power.

The hunt leads Stark to an abandoned shopping mall infested with tribes of squatters. Somewhere in this kill zone is a dead man with the answers Stark needs. All Stark has to do is find the dead man, recover the artifact, and outwit and outrun the angry old gods—and natural-born killers—on his tail.

But not even Sandman Slim is infallible, and any mistakes will cost him dearly.

“Hot damn, a new Sandman Slim novel! I will fight you for it if I have to.Yes, the series is just that good (P.S., I will fight VERY VERY DIRTY).”
— John Scalzi

“A deft mixture of urban fantasy and light comedy, the fifth Sandman Slim novel is sure to appeal to the author’s growing fan base, not to mention readers of such writers as Jim Butcher, P. N. Elrod, and F. Paul Wilson.”
— Booklist

“One of the great horror setups of all time.… If there’s one thing Kill City Blues demonstrates, it’s that Kadrey’s still got a ton of material for Sandman Slim. I can’t wait to read it all.”
— Cory Doctorow, BoingBoing.com

“We can savor every insight from a grand master of the blunt exposition.”
— Locus