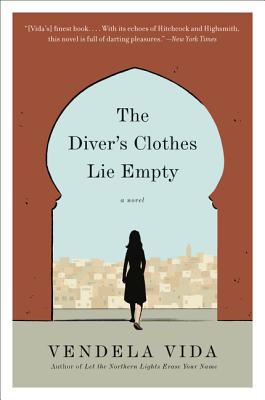 From the acclaimed author of Let the Northern Lights Erase Your Name comes a taut, spellbinding literary thriller that probes the essence and malleability of identity

In Vendela Vida’s taut and mesmerizing novel of ideas, a woman travels to Casablanca, Morocco, on mysterious business. While checking into her hotel, the woman is robbed of her wallet and passport—all of her money and identification. Stripped of her identity, she feels burdened by the crime yet strangely liberated by her sudden freedom to be anyone she wants to be.

Told with vibrant, lush detail and a wicked sense of humor, The Diver’s Clothes Lie Empty is part literary mystery, part psychological thriller—an unforgettable novel that explores free will, power, and a woman’s right to choose not her past, perhaps not her present, but certainly her future. This is Vendela Vida’s most assured and ambitious novel yet.

“[Vida’s] finest book....With its echoes of Hitchcock and Highsmith, this novel is full of darting pleasures.”—New York Times

Vendela Vida is the award-winning author of six books, including Let the Northern Lights Erase Your Name and The Diver’s Clothes Lie Empty. Her new novel, We Run the Tides, will be published by Ecco on February 9, 2021. She is a founding editor of The Believer and coeditor of The Believer Book of Writers Talking to Writers and Confidence, or the Appearance of Confidence, a collection of interviews with musicians. She was a founding board member of 826 Valencia, the San Francisco writing center for youth, and lives in the Bay Area with her family.

“[Vendela Vida’s] finest book...With its echoes of Hitchcock and Highsmith, this novel is full of darting pleasures.” — New York Times

“A brilliant inquiry into the eternal mysteries of being… Told cinematically in one long, bewitching take, Vida’s astutely insightful, keenly suspenseful, surreptitiously metaphysical novel demands to be read in a breath-held trance and then plunged into again.” — Booklist (starred review)

“Vendela Vida’s work is utterly compelling, surprising, economical, lush, beautifully written. Reading her inspires me, and reminds me of how powerful the novel can be - how addictive and vital - and of how rarely a writer as precise, artful, and passionate as her comes along.” — George Saunders

“Like Bowles’ despairing, existential “The Sheltering Sky,” Vida’s novel penetrates the psyche of an American traveler when confronted with an alien culture and landscape…. [A]n emotionally precise and absorbing meditation on how grief can divest us of our most fundamental sense of self.” — San Francisco Chronicle

“Every woman writing literary thrillers gets compared to Patricia Highsmith once if she’s lucky, but this is one of the few times it’s felt to me like a hopeful comparison. After this, I’ll read anything Vida writes.” — Chicago Tribune

“Vendela Vida has written a truly original novel, a work of art that shines with Buñuelian play and cruelty. The situation is discomfiting and addictive. You will be driven to read this novel compulsively, and then you will have the same strange sly smile that I do, now.” — Rachel Kushner, author of The Flamethrowers

“Smart, thoroughly engrossing, funny, and even a bit disturbing. … Part mystery/thriller and part absurdist/postmodern novel with a feminist slant, it is simultaneously funny and serious.” — New York Journal of Books

“You will tear through Vendela Vida’s The Diver’s Clothes Lie Empty, this wry, edgy, philosophical thriller, this love child of Albert Camus and Patricia Highsmith, this sly satire of Hollywood, this entertaining journey through the vast desert of identity and regret.” — Jess Walter, author of Beautiful Ruins

“Unequivocally a thriller, but more movingly, a meditation on identity.” — Vanity Fair

“The novel packs a wallop, taking the themes of Camus and Kierkegaard and transplanting them into a story with the pace and intrigue of a page-turner… A speedy and suspenseful fish-out-of-water tale with a slyly philosophical bent.” — Kirkus

“The Diver’s Clothes Lie Empty is both a travel cautionary tale and a fantasy about the infinite possibility that travel offers.” — NPR's Fresh Air

“Second-person narration is tough to pull off - but when a writer is as skilled as Vendela Vida, that experimental form results in a compelling interactive experience. What follows is a wild journey through Morocco, and an interesting take on the surreal experience of literally losing your identity.” — Bustle

“A chilling tale about the gradual loss of identity-a novel of doubles, invisibility and lies, poised somewhere between a fever-dream and a suspenseful thriller . . .Vendela Vida perfectly captures what it feels like to be unreal, especially to oneself, and grasping at roles in order to survive.” — Sheila Heti, author of How Should a Person Be?

“A tense, often nerve-wracking read, the anxiety heightened by the fact that it all comes to the reader as a direct address, in the second person. An artful, driving exploration of identity.” — Portland Monthly

“A riveting read about the ups, downs, and self-discovery of travel.” — Los Angeles Times

“This new volume is compelling in its underlying mystery and its call for readers to explore their individual pasts and the opportunities they can take in pursuit of a fulfilling future. It’s never too late, the novel suggests, to begin anew. Vida’s prose is spare and suspenseful, moving the reader quickly toward the denouement. It’s a novel ripe for the summer season-a book you can read on your porch or at the beach, leaving your old self, like the diver’s clothes, behind.” — Seattle Times

“Vida’s prose is spare and suspenseful, moving the reader quickly toward the denouement. It’s a novel ripe for the summer season-a book you can read on your porch or at the beach, leaving your old self, like the diver’s clothes, behind.” — Electric Literature

“[Diver’s Clothes] begins in a realist mode but sheds this skin as it goes, becoming in its second half a gently postmodern, surrealist philosophical novel on the protean nature of personal identity. That it manages to do this gracefully and in the span of 212 pages is remarkable.” — BookForum

“[The main character’s] transformation from victim into liberated shadow is as exhilarating and unsettling as Vida’s novel itself-a literary tour de force in the skin of a thriller.” — O, the Oprah Magazine