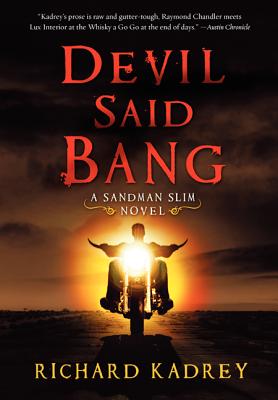 By Richard Kadrey
Not available to order
Backordered--delivery time uncertain

This is book number 4 in the Sandman Slim series.

Richard Kadrey’s Sandman Slim—aka James Stark—is, quite simply, one of the most outrageous uber-anti-heroes ever to kick serious butt on this or any other world or dimension.

In his previous three adventures—Sandman Slim, Kill the Dead, and Aloha from Hell—Stark has fled Hell for California, taken on angels, demons, outlaw bikers, zombies, covert government operatives, and all manner of monsters, while saving humankind from total annihilation on numerous occasions. But in Devil Said Bang, he finally assumes the role he was destined for: as the new Lucifer, ruler of the Underworld.

Combining outrageously edgy humor with a dark and truly twisted vision, Richard Kadrey has once again delivered a masterful amalgam of action novel, urban fantasy, and in-your-face horror that will delight a wide range of readers—from Christopher Moore and Warren Ellis fans to the devoted adherents of Jim Butcher, Charlaine Harris, Kim Harrison, and Simon Green.

“Richard Kadrey continues to knock them way the hell out of the park.”
— Cory Doctorow, boingboing.com

“Richard Kadrey’s ‘Sandman Slim’ series is one of my favorite sets of fantasy books from the last few years.”
— John Scalzi

“Allow me to both love this series for its feel of crossing hard-boiled crime pulp with H.P. Lovecraftian fantasy, and hate the author for being so damn good at it.”
— Bookgasm

“The most irreverent, darkly comedic, and downright cool installment to date. …The action-packed and bombshell-laden blend of dark fantasy, crime fiction, and Hellish sitcom is utterly readable.
— Publishers Weekly