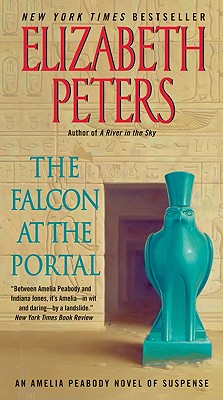 This is book number 11 in the Amelia Peabody Series series.

“Between Amelia Peabody and Indiana Jones, it’s Amelia—in wit and daring—by a landslide.”

New York Times bestselling Grandmaster Elizabeth Peters transports us to the Land of the Pharoahs—and leaves us in the most capable hands of intrepid archeologist and adventurer Amelia Peabody—in The Falcon at the Portal. A suspenseful and always surprising romp through 1911 Egypt with Amelia and her equally indomitable family, the Emersons, The Falcon at the Portal immerses us in a fascinating world of antiquity and majesty, and plunges us into a mystery as perilous as it is puzzling. As the Cleveland Plain Dealer suggests, let us all “raise a toast to the incomparable Amelia Peabody.”