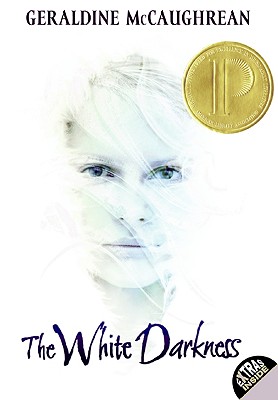 Winner of the Michael L. Printz Award for Excellence in Young Adult Literature!

Geraldine McCaughrean—two-time Carnegie Medalist for Where the World Ends and Pack of Lies—takes readers on a spellbinding journey into the frozen heart of darkness with this lyrical, riveting, and imaginative young adult novel.

Symone "Sym" Wates is obsessed with the Antarctic and the brave, romantic figure of Captain Oates from Scott's doomed expedition to the South Pole. In fact, Oates is the secret confidant to whom she spills all her hopes and fears.

But Sym's uncle Victor is even more obsessed—and when he takes her on a dream trip into the bleak Antarctic wilderness, it turns into a nightmarish struggle for survival that will challenge everything she knows and loves.

Geraldine McCaughrean is the Printz Award-winning author of The White Darkness. She has been honored with England's most prestigious children's book award, the Carnegie Medal, and is the only three-time winner ever of the Whitbread Children's Book Award. She also wrote Peter Pan in Scarlet, the first official sequel to the treasured masterpiece Peter Pan, and the critically acclaimed The Death-Defying Pepper Roux. Geraldine lives in Berkshire, England, with her husband and actress daughter.

“Readers will find this a triply compelling tale: for its slow revelation of a deranged soul; for its young narrator, who turns out to be tougher than she or anyone else supposes; and for its wildly hostile setting, which quickly turns the secret expedition into a frantic struggle to survive.” — Kirkus Reviews (starred review)

“What makes the book truly stand out is Sym’s unique personality... and, through it all, McCaughreen’s inspired wordplay and powerful imagery.” — The Horn Book

“This is an amazing work...there is no question that McCaughrean is a fine writer.” — KLIATT